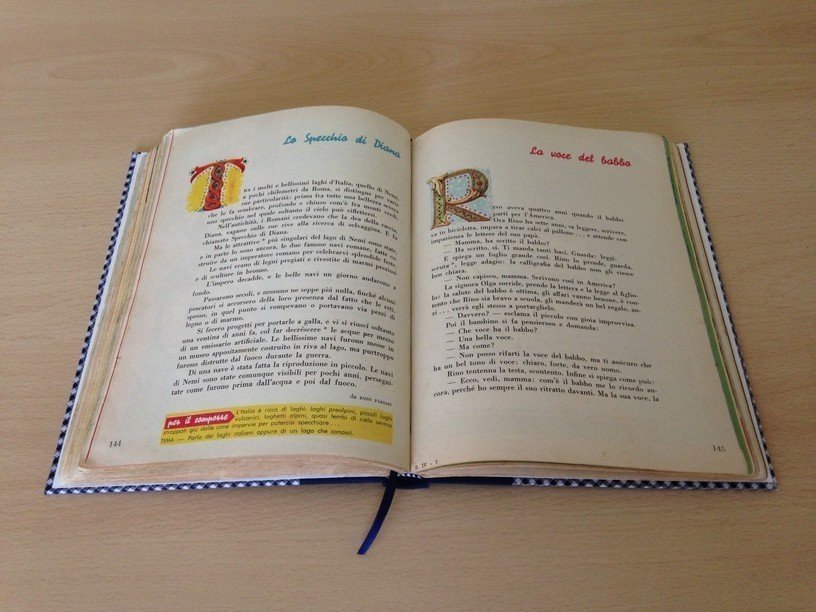 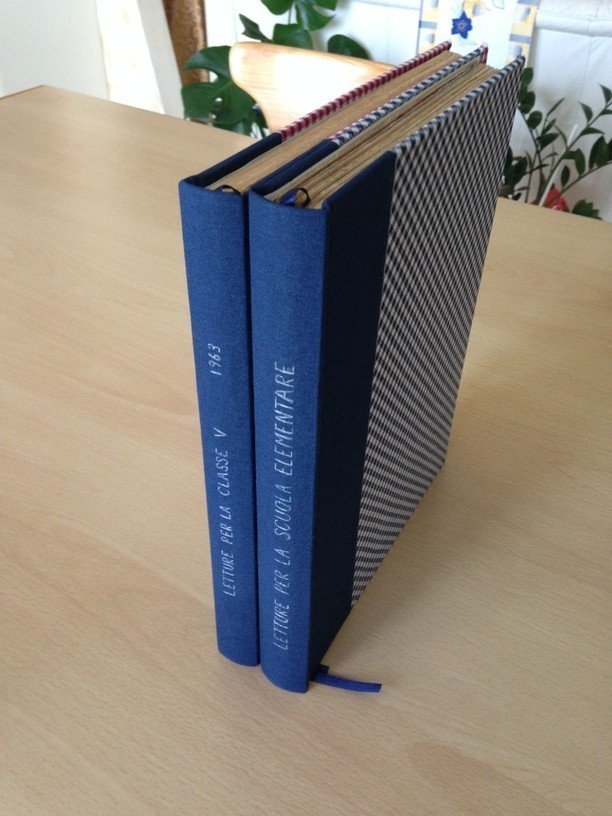 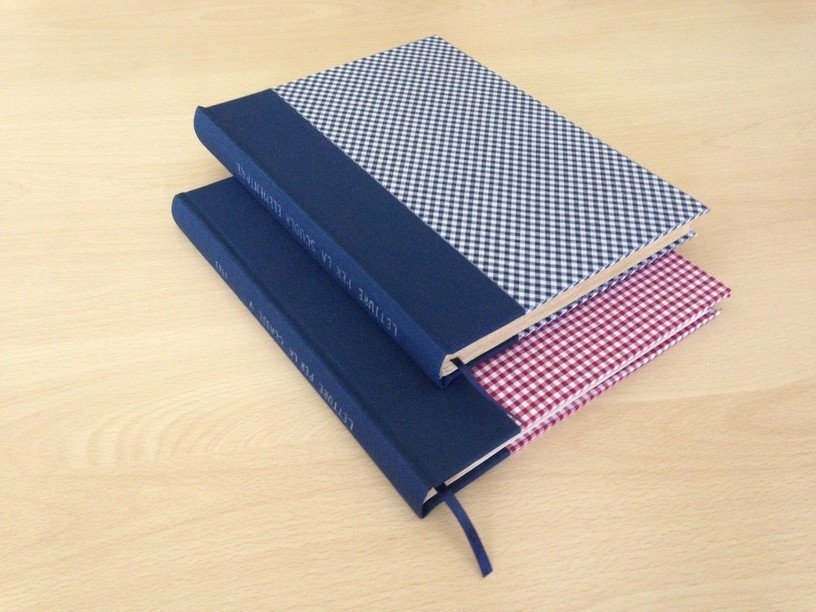 I've found a couple of reading books from my mother's primary school. I like them for their graphic layout and pictures but they are in bad conditions. Both have lost their paperback covers and one is about to lose some pages because of broken binding threads.

I'm going to restore these books. I'll make a full book rebinding for the one which is loosing pages and then I'll make two fabric covered hardcovers for both. 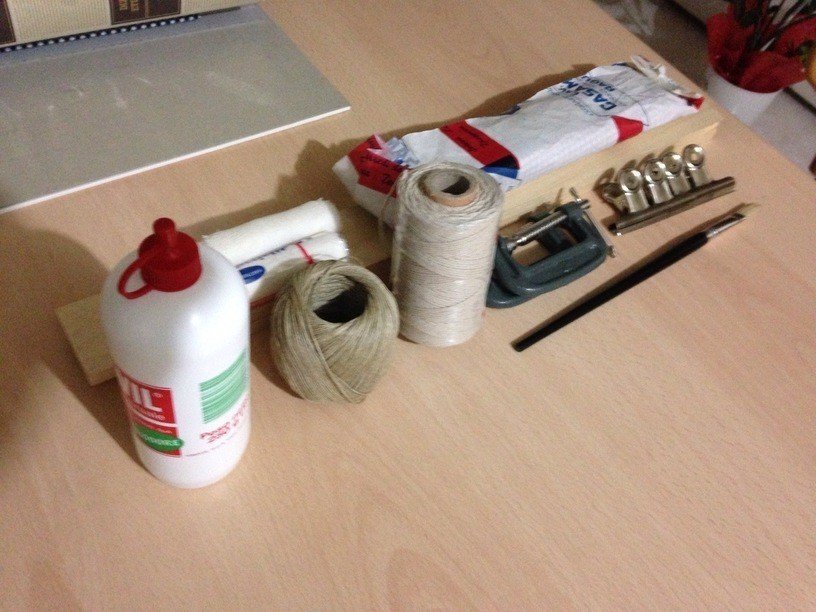 Here is a list of tools and materials I will use on this project:

Let's start resewing the book with the broken threads.

First of all, I removed the binding thread by cutting it from the middle pages of each signature (signatures are sheets of paper stacked and folded as a group).

Then I created the top and bottom flyleaves. They are two special signatures, made of a couple of sheets of thick paper, placed at the top and bottom of the stack of signatures which compose the book. They will hold the book's cover which will be glued to the first and last page of the book. I made each copule of flyleaves by folding and cutting an A3 sheet of paper of 120 g/m2 grammage. 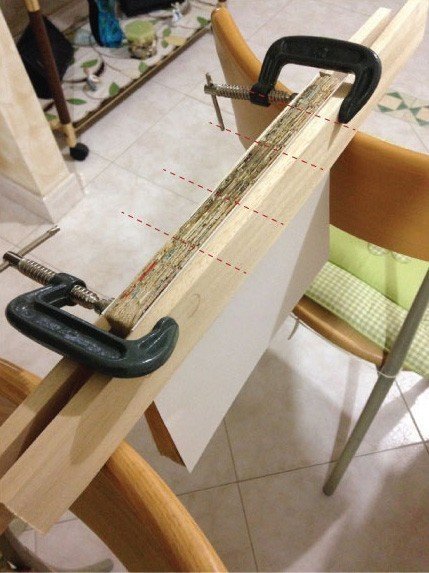 Now that the signatures and the flyleaves are ready, the spine must be prepared for the sewing phase by making some cross cuts that will be used to host some twine threads. These threads will provide support for the linen thread which will run into the signatures.

I've created a sort of vise using two wooden boards and two c-clamps. Once the signatures and the flyleaves were stacked together and clamped in the vise, I hanged the book over two chairs and cut four small grooves with a hacksaw. These grooves should be cut in between the leftmost and rightmost holes from the original binding; I will reuse these holes during the sewing phase, hence I added two holes for each flyleaves couple, aligned with them. 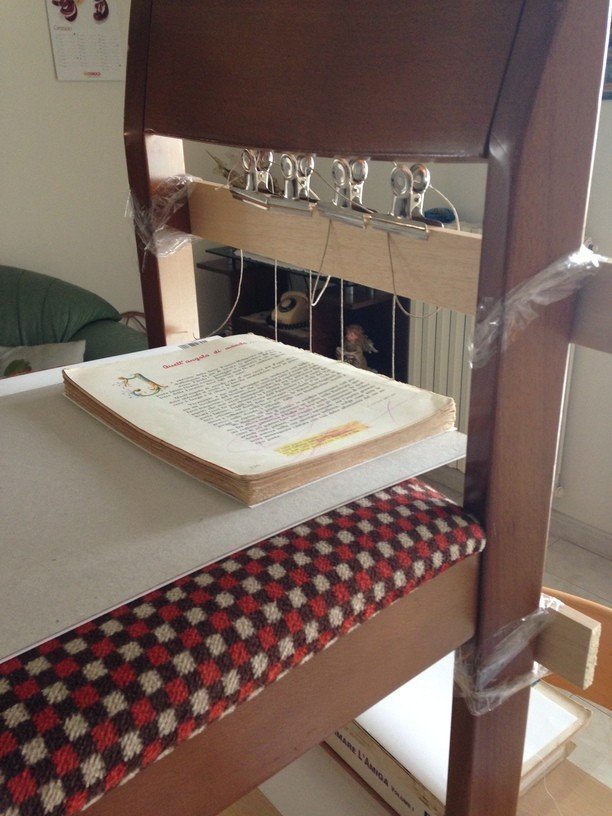 Now the signatures are ready to be sewed. I've made a bookbinding loom for this operation. I attached two wooden boards to a chair's back with some tape. After putting the book on the chair’s seat I clamped four piece of twine to the boards and aligned them to the four grooves in the spine. The sewing thread will pass inside the signatures and around these cords as we’ll see in the next steps. 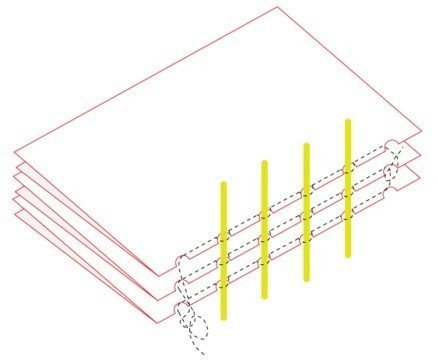 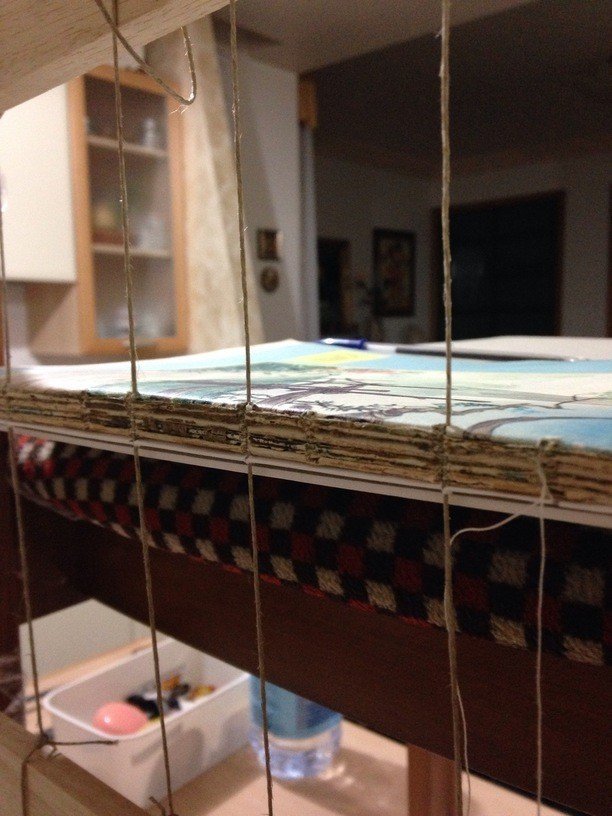 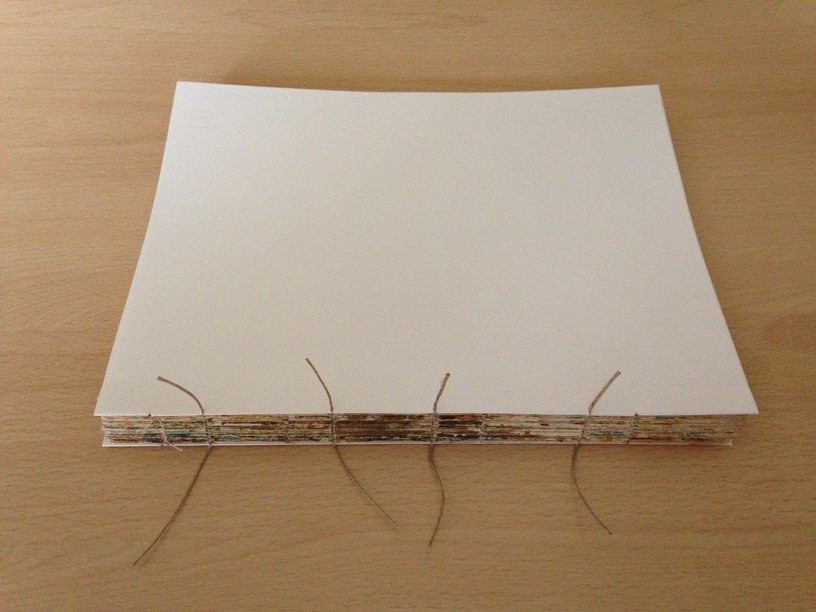 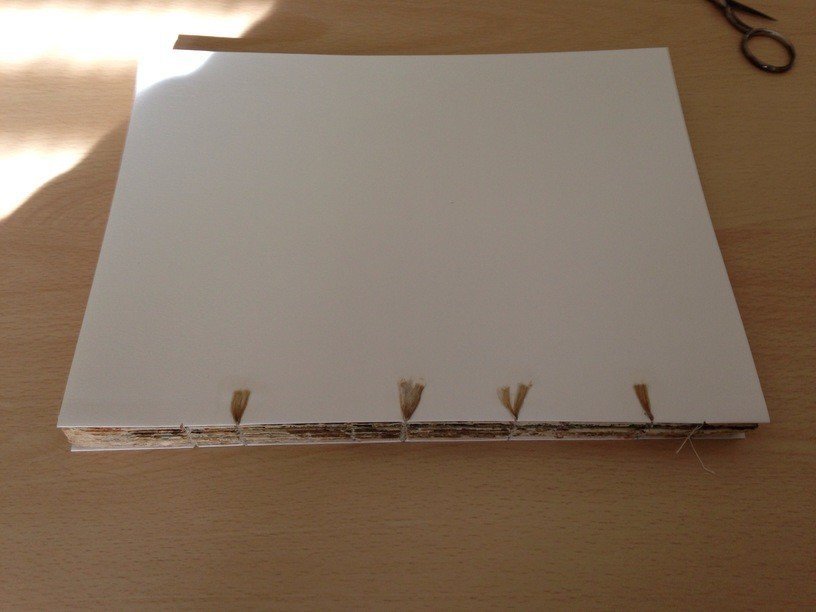 Now we can start sewing. I've put an animated gif you can follow along which shows the path of the thread through the signatures and the twine columns. 6 holes will be used for each signature: the leftmost and rightmost from the original binding where the linen thread will enter and exit; and the 4 holes in the middle, made by the grooves, where the twine threads will be hosted.

Here are the sewing steps: 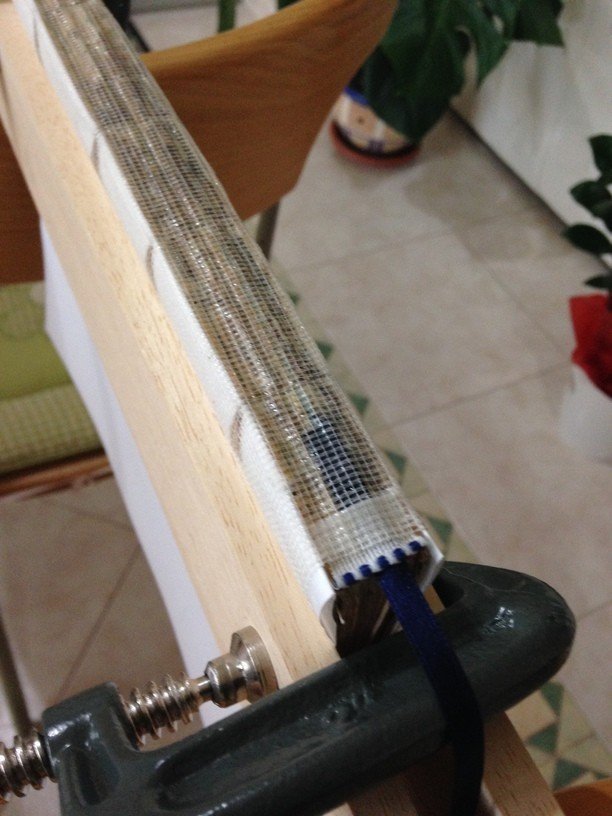 Now it is time to reinforce the spine and attach the headband decorations and the bookmark ribbon.

Cut a strip of bookbinding gauze and wrap it over the spine. Make sure the gauze is covering the glued cords on the sides of the book. Clamp the book into the vise and put some coats of glue on the gauze. Wait for the glue to dry, then attach the bookmark ribbon and the headbands to the spine.

Now remove the book from the vise and glue the sides of the gauze to the flyleaves. This will ensure a strong connection between the book and the flyleaves, where the hardcover will be attached. 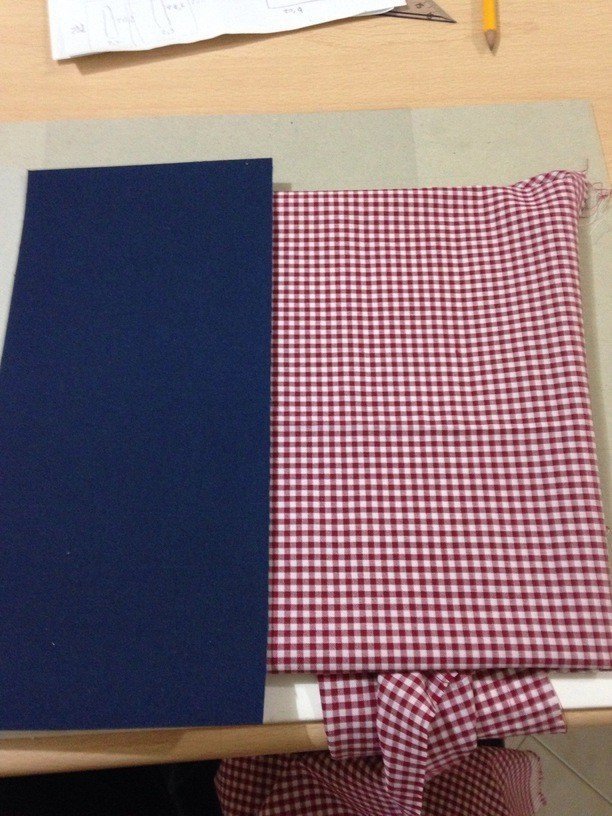 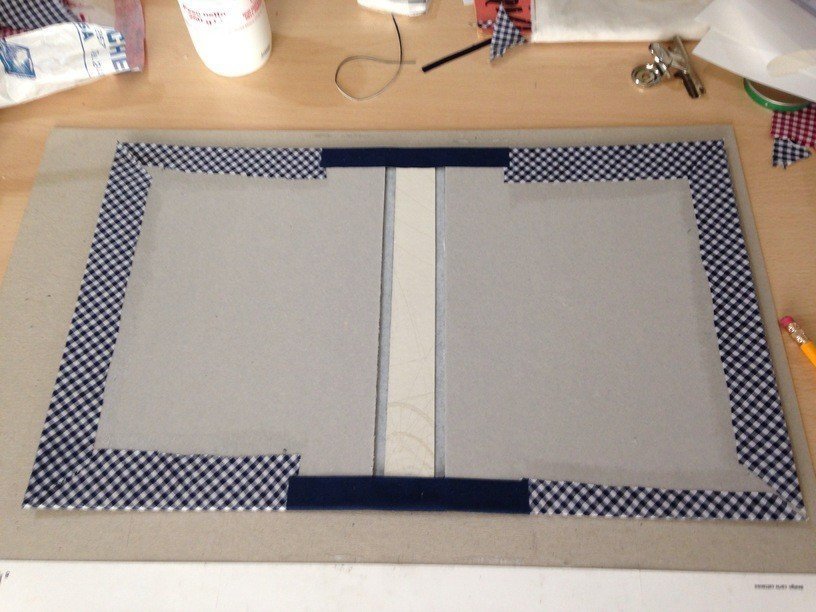 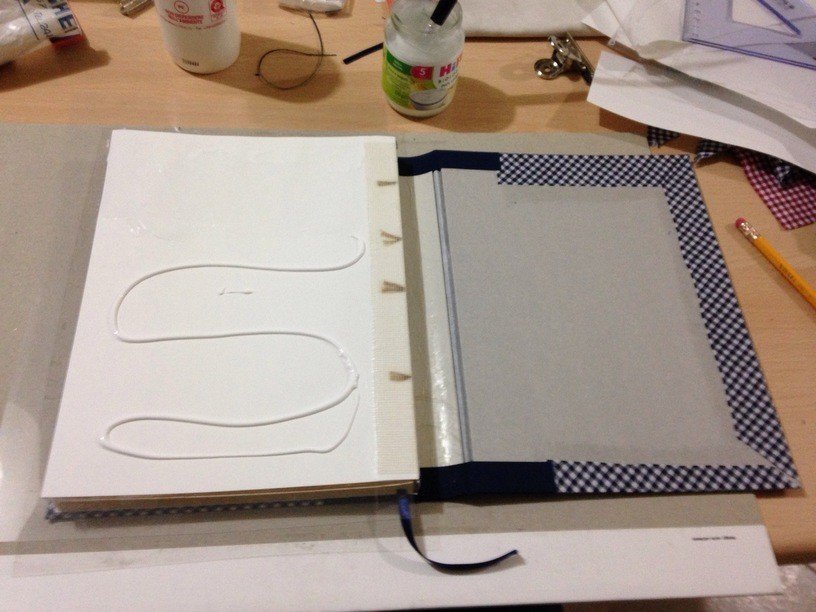 I bought some pre-cut book boards from a typographer for the hardcover, but you can use some cardboard sheets and cut it by yourself. I put a small strip of cardboard on the spine part of the cover. To connect the three parts of the cover I used some booking cloth which is strong and flexible enough to hold the front and back cover while opening the book. Make sure to put enough padding between the spine and the covers to allow the book to close fine.

After finishing the hardcover, I put a couple of sticks on the spine sides and then kept the book for some time under some weight to give the spine its final shape. 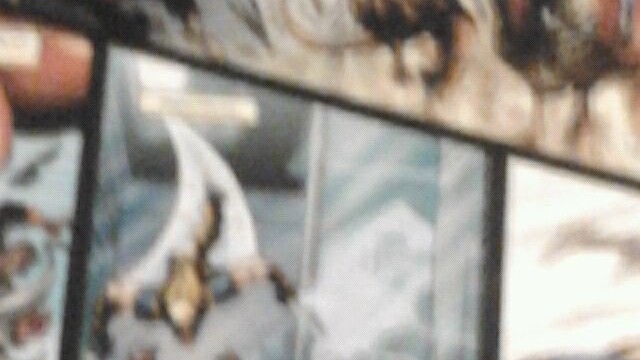 Books & Journals As Affix Your Notebooks With Designs
★ 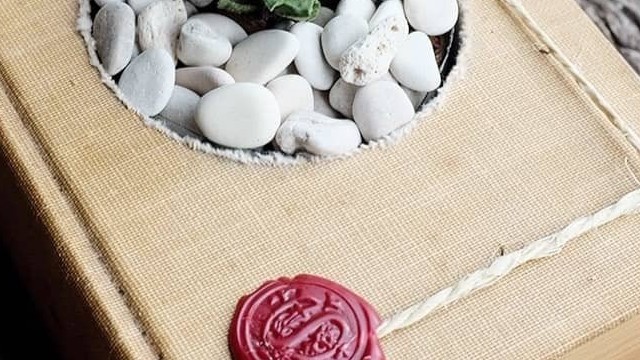 Books & Journals How to Create Succulent Planters From Vintage Books
★ 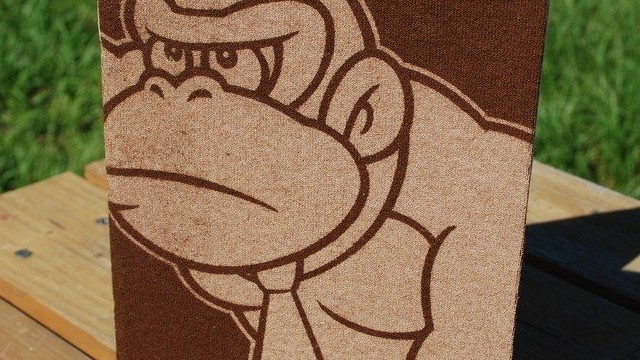 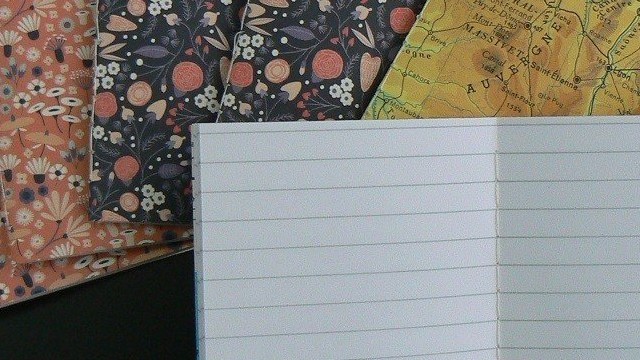 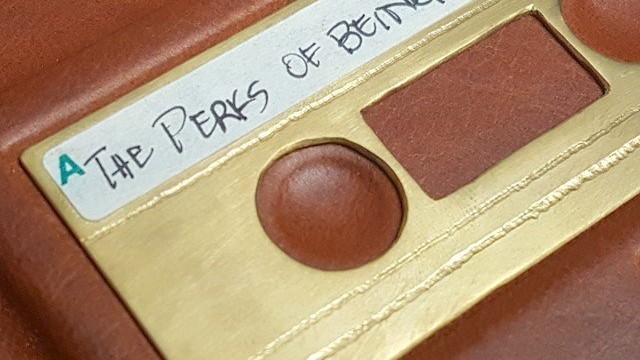 Books & Journals Perks of Being a Wallflower Leather Redesign
★ 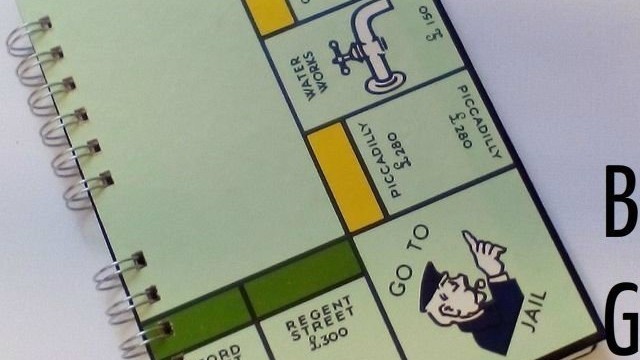 Books & Journals As Affix Your Notebooks With Designs
0

Books & Journals How to Create Succulent Planters From Vintage Books
0